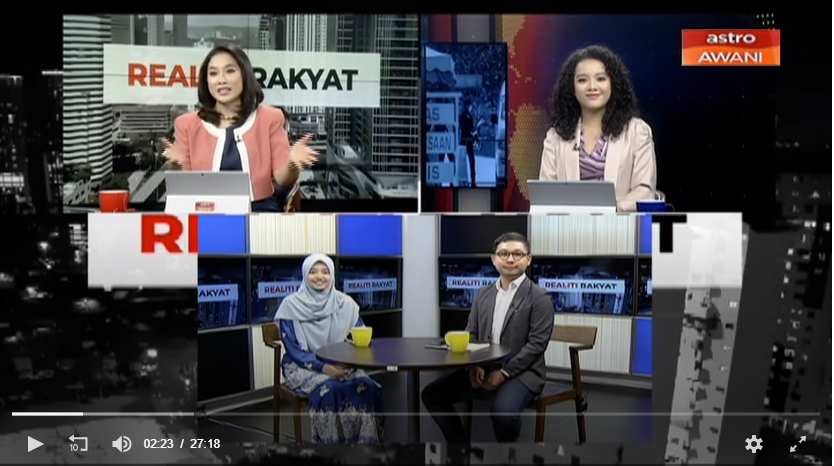 The National Health and Morbidity Survey 2019 found that 21.8% of Malaysian children below the age of 5 are affected by stunting. This is an increase from similar surveys done in  2011 and 2015 (16.6% and 17.7% respectively). The survey also shows that stunting is not only found in low income households but also amongst the affluent.

Derek Kok, Research Analyst at JCI, speaks to Astro Awani on this issue.

Video: “Beyond Growth: Financing Sustainability to Build Back Better”

Whether “sustainability” is at the heart of post pandemic investment choices will determine whether we can truly rebuild forward more resilient and sustainable economies. Prof Yeah Kim Leng speaks at the jointly organised forum with ICMR.

Radio: Diving into Sustainable Solutions at the National Solutions Forum 2022

Professor Woo Wing Thye discusses the upcoming National Solutions Forum (NSF) as a showcase for the most impactful solutions to Malaysia's SDG-related challenges.

Video: The Effects of RCEP Coming into Force?

Prof Shandre Thangavelu helps us to understand the stakes underlying RCEP as a regional trade agreement coming into force.

Video: Prosperity tax – will the rich pay or run away?

Dr Woo Wing Thye helps us to understand who will benefit from the disaster relief measures and how Budget 2022 could do better with a little tweaking.

Video: Economist: Why invest in aerospace when children are suffering from stunted growth?

KiniTV speaks to economist Dr Woo Wing Thye to better understand how the budget can benefit SMEs and some of the opportunities missed by the government in helping this sector to recover.

Prof Woo Wing Thye, JCI President, is interviewed by Phoenix TV on his views on the recent Sino-US trade and currency negotiations.