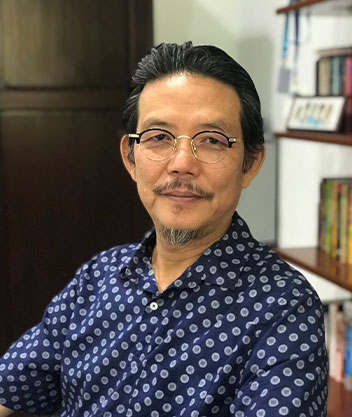 Dato’ Dr Ooi Kee Beng is a Senior Fellow of the Jeffrey Cheah Institute on Southeast Asia. He is also the Executive Director of the Penang Institute, before which, he was the Deputy Director of the Institute of Southeast Asian Studies for five years. He is the founder-editor of Penang Monthly and ISSUES (Penang Institute) and ISEAS Perspective and Trends in Southeast Asia (ISEAS). He writes regularly for The Edge Malaysia, and other periodicals in the region. His The Reluctant Politician: Tun Dr Ismail and His Time (ISEAS 2007), won the “Award of Excellence for Best writing published in book form on any aspect of Asia (non-fiction)” at the Asian Publishing Convention Awards 2008. The book was turned into an award-winning musical by the Kuala Lumpur Performance Arts Centre, titled “Ismail: The Last Days”, performed in August 2008 at KLPAC. His recent books include The Eurasian Core and its Edges: Dialogues with Wang Gungwu on the History of the World, and As Empires Fell: The Life and Times of Lee Hau-Shik, the First Finance Minister of Malaya.

my Say: Fairness is the virtue that can reset the world

Dr Ooi Kee Beng says a fair attitude towards fellow humans is not only its own reward; in the larger scheme of things, it is enlightened self-interest.

my Say: In a pandemic, science and statesmanship must tactically converge

Dr Ooi comments that while scientists are not necessarily proficient in handling a public pandemic, politicians do not excel in being their managers either.

Dr. Ooi Kee Beng comments on COVID-19 being a wake-up call to act on environmental, economic and existential problems predating the pandemic.

MySay: The new normal — regionalising the global and the national

Dr. Ooi Kee Beng proposes Malaysia's strategy moving forward amidst a triple whammy of political, social and economic constraints in the first half of 2020.

My Say: The dynamics needed to dislodge Malaysia from its race fetish

Dr. Ooi Kee Beng weighs in on the racial dynamics in Malaysian politics under the new Perikatan Nasional government.

My Say: Of pyramids, eggs, durians and depicting power in Malaysia

For Malaysian politics to transcend the primacy of identity and move on to policymaking that is...

Commentary: Was the Pakatan Harapan coalition doomed to fail from the start?

Dr. Ooi Kee Beng says the Pakatan Harapan coalition was fundamentally fragile: the moves made by its enemies in recent days have exposed its core vulnerabilities.

my Say: Malaysia, truly the world

Dr. Ooi Kee Beng weighs in on the factors of conflict in Malaysia.

Are digital disruptions laying the foundations for holistic education in the 21st century?

With disruptions in major industries changing the structure of daily economic life, all of us should sense very clearly by now that the education industry...

Malaysians’ hopes for a rapid overhaul of their browbeaten higher education system are unrealistic, according to an expert...

Oh, the humanity: rise of robots ‘to force about-turn in academy’

The humanities will reclaim their preeminence in the academy as the rise of the machines puts paid to two centuries of utilitarian education, according to the political historian Kee Beng Ooi...

The role and contribution by Penang’s second Chief Minister Lim Chong Eu in turning the state into an economic powerhouse has been immortalised in a book...

Public transportation has long been at the crux of the government’s agenda to improve its people’s livelihoods...

MySay: Who says it’s not possible for Malaysia to move beyond identity politics?

For Malaysian politics to transcend the primacy of identity and move on to policymaking that is...

On August 8, the Malaysian government announced that khat (Jawi calligraphy) will be an optional elective for Chinese and Tamil vernacular schools...

Commentary: Malaysia’s lowering of the voting age and the huge forces fueling the change

The Reformasi movement will now be continued by the next generation of Malaysian youths, says Penang Institute’s Ooi Kee Beng...

Commentary: After a year in power, has Pakatan Harapan learnt enough to save Malaysia from itself?

The question is whether it will be bold enough, united enough, and insightful enough to break the country’s path...

MySay: A democracy is only as mature as its voters manage to become

Malaysia must seek a new developmental narrative as the Pakatan Harapan government settles into its role of governance and policymaking, says Penang Institute’s Ooi Kee Beng.

Commentary: The Bewildering Game of Malaysian Politics, The Rot Within the Barisan Nasional

The Barisan Nasional enjoyed huge powers of incumbency and shifted the goalposts; yet its internal weaknesses brought it down, says Penang Institute's Ooi Kee Beng.