Skip to content
JSC hosts SDG Webinar Series: (7 July) Should the Parliament be a Fulltime Institution?

JSC hosts a discussion on “Should the Parliament be a Fulltime Institution?” as part of SDG Webinar series 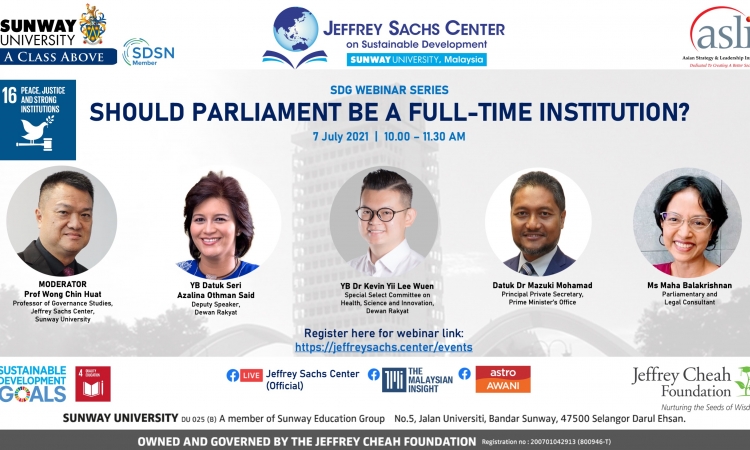 As the nation is discussing the reconvening of Parliament, it is important to investigate what the Parliament can and should do in policymaking. Unlike Parliaments in the UK and Canada which meet some 135-150 days a year, the Malaysian parliament meets only around 60-70 days a year. In the UK House of Commons, every ministerial portfolio is subject to scrutiny by one parliamentary select committee, and every MP who is not a member of the Administration or Shadow Cabinet sits on at least one Parliamentary Select Committee. In sharp contrast, Malaysia has 31 ministerial portfolios in the Cabinet but only nine parliamentary special select committees (PSSCs), excluding at least 14 ministries including Environment, Foreign Affairs, Communications and East Malaysian Affairs. Out of 156 parliamentarians who are not ministers or deputy ministers, only 66 were appointed to the nine PSSCs (each has seven members) and the 14-member Public Accounts Committee. As many as 88 parliamentarians (79 opposition and nine from the government backbench) were not given any national roles in policymaking. When the Parliament is not in session, 40% of our parliamentarians are effectively left with running their constituency service centres as their main job. When PSSCs are not functioning, the number of idle parliamentarians rises up to 70%. Only ministers and deputy ministers work full-time.

Is it time to turn the Parliament into a full-time institution with longer sitting time and extensive PSSCs so that every MP gets involved in policymaking and governance? Should the real policy-making process be expanded from ministers and senior civil servants to also include government backbenchers and opposition MPs? What are the obstacles to overcome such substantive reforms?