Skip to content
JCI-JSC-PB-2020-03: The Wide Range of National Reactions to the Common COVID-19 Shock: Observations on Causes and Effects 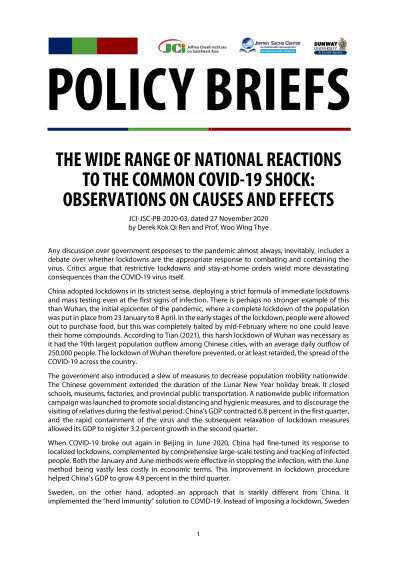 The Wide Range of National Reactions to the Common COVID-19 Shock: Observations on Causes and Effects

Any discussion over government responses to the pandemic almost always, inevitably, includes a debate over whether lockdowns are the appropriate response to combating and containing the virus. Critics argue that restrictive lockdowns and stay-at-home orders wield more devastating consequences than the COVID-19 virus itself.

China adopted lockdowns in its strictest sense, deploying a strict formula of immediate lockdowns and mass testing even at the first signs of infection. There is perhaps no stronger example of this than Wuhan, the initial epicenter of the pandemic, where a complete lockdown of the population was put in place from 23 January to 8 April. In the early stages of the lockdown, people were allowed out to purchase food, but this was completely halted by mid-February where no one could leave their home compounds. According to Tian (2021), this harsh lockdown of Wuhan was necessary as it had the 10th largest population outflow among Chinese cities, with an average daily outflow of 250,000 people. The lockdown of Wuhan therefore prevented, or at least retarded, the spread of the COVID-19 across the country.

The government also introduced a slew of measures to decrease population mobility nationwide. The Chinese government extended the duration of the Lunar New Year holiday break. It closed schools, museums, factories, and provincial public transportation. A nationwide public information campaign was launched to promote social distancing and hygienic measures, and to discourage the visiting of relatives during the festival period. China’s GDP contracted 6.8 percent in the first quarter, and the rapid containment of the virus and the subsequent relaxation of lockdown measures allowed its GDP to register 3.2 percent growth in the second quarter.

When COVID-19 broke out again in Beijing in June 2020, China had fine-tuned its response to localized lockdowns, complemented by comprehensive large-scale testing and tracking of infected people. Both the January and June methods were effective in stopping the infection, with the June method being vastly less costly in economic terms. This improvement in lockdown procedure helped China’s GDP to grow 4.9 percent in the third quarter.

Sweden, on the other hand, adopted an approach that is starkly different from China. It implemented the “herd immunity” solution to COVID-19. Instead of imposing a lockdown, Sweden chose to provide its citizens with voluntary social distancing guidelines at bars, restaurants, parks, public transportation, schools, and even kept national borders open.

Did this approach work? At the height of the coronavirus outbreak in spring, Sweden’s death rate was not only one of the highest in Europe, but was also on par with the United States. However, the daily number of new infections in Sweden started declining rapidly in late June, bringing the daily number of deaths from COVID-19 to just three daily deaths in early September compared to a peak of 115 in April. When the number of new cases per capita in Sweden averaged lower than Norway and Denmark, Anders Tegnell—Sweden’s state epidemiologist at the forefront of its controversial strategy—gloated over that “Sweden has gone from being one of the countries in Europe with the most spread to one that has some of the fewest cases in Europe”.

But the situation reversed after September. As of 15 October, Sweden has the highest number of new cases per capita amongst its Nordic counterparts. Average daily cases nationwide have risen 173 percent from the week of 2–8 September to 30 September – 6 October, with cases in Stockholm alone increasing 405 percent in the same period. The debate on the wisdom of the “herd immunity” solution to the COVID-19 challenge was finally settled on 16 November 2020 when Prime Minister Stefan Lofven told the Swedish public: “Don’t go to the gym, don’t go the library, don’t have dinner out, don’t have parties—cancel!”; and he announced the enforcement of strict social distancing measures beginning the week after. The next day, King Carl Gustaf posted a royal message on Instagram instructing his subjects to “Hold on tight!“. Sweden is now no longer an outlier in its management of COVID-19.

In retrospect, it is magical thinking to believe COVID-19 should be allowed to run its course unimpeded in order to attain the natural nirvana state of herd immunity in the community. The unfortunate but unsurprising outcome is that Sweden has significantly higher death rates than its Nordic neighbours, which had all implemented early lockdowns of their economies. Up to early November 2020, the number of deaths per 100,000 people was 62.26 in Sweden, 13.33 in Denmark, 6.78 in Finland, and 5.74 in Norway. The surprising outcome from the Swedish public health experiment was on the economic front. In the first half of 2020, Sweden’s GDP growth (-8.1 percent) was a bit better than Denmark’s (-8.3 percent) but markedly worse than that of Norway’s (-6.1 percent) and Finland’s (-5.4 percent). Sweden had allowed more citizens to die without bringing more economic benefits to the survivors.

To look at the evidence more systematically, Jeffrey Sachs (2021) conducts a statistical evaluation of seven common public health measures that are being used in various combinations by different countries to control and contain the COVID-19 virus:

Sachs calls strategies (1), (2), and (3) “low-cost measures” because the lockdowns espoused in strategies (6) and (7) impose tremendous costs on the economy. He found that the variable with the largest magnitude by far is hygienic behavior, which includes four distinct practices: the wearing of face masks, avoiding crowded places, improving personal hygiene, and avoiding touching objects in public. The indicator with the next largest impact on the regression is the economic shutdown indicator. However, a full lockdown, meaning a 100 percent drop in visits to economic sites, would only result in a modest reduction in the infection rate. Sachs therefore argues that his results underscore that lockdowns are “at best a stop-gap policy until more efficient and powerful public health measures—hygiene and isolating—can be scaled up”.

More and more, it increasingly appears that this discussion over the correct response to COVID-19 has been mischaracterized as a clash between lockdown or no lockdown, especially when other measures to contain the virus have not been implemented or failed in its execution. This debate over lockdowns obscures the key policies that successful governments in Asia have taken.

Take the wearing of face masks. Data on the wearing of face masks in public places showed that by 9 March, face mask use was greater than 50 percent in China, Taiwan, Hong Kong, Thailand, Philippines, and Malaysia, but was less than 10 percent in the US, Germany, and the United Kingdom. Some have attempted to explain this difference by attributing it to the so-called conformist and collectivist cultures of Asian countries whose citizens are more likely to mask themselves and practice social distancing out of respect for government guidelines and the welfare of others, as opposed to “individualistic” Western populations who care more for personal liberty. Sweden’s Minister of Health and Social Affairs Lena Hallengren has even said that there is no “tradition or culture” of mask wearing in their country, unlike Asia.

While cultural values can influence a population’s response to events such as a pandemic, such essentialist caricatures may obscure and ignore the crucial role of government policy in driving these practices in the first place. Strict enforcement, especially when accompanied by punitive actions, can be highly effective. In Malaysia, face masks were made compulsory in crowded public areas from 1 August onwards. Face mask use in the country jumped from under 50 percent in March to 91 percent by August.

Furthermore, countries with high face mask use often had leaders who not only communicated the importance of such practices but also set an example for their populace. For instance, Western countries like Slovakia and Czech Republic are not the first places that one associates with the prevalent use of face masks, but its leaders have been shown to wear masks in public appearances and played a crucial role in normalizing its use among their citizens. It is no surprise that face mask usage is so low in countries like the US where President Trump constantly downplayed the importance of wearing facemasks, or in Brazil where President Bolsonaro only started to wear face masks after being ordered to do so by a federal judge.

It is also of little use if governments mandate the wearing of masks or other hygienic behaviour if there are inadequate supplies of the very items that are needed for these practices, even in countries where mask-wearing is the norm. In Taiwan, the government pioneered a digital rationing system to facilitate mask distribution for its residents; see Kuo (2021). Citizens could purchase face masks from state-contracted pharmacies either online or in person. For the latter, the digital system assigned citizens to different dates according to the last digit of their national ID number to avoid long queues. An app was developed to inform citizens of the number of masks in stock at each store, along with information on store names, locations, opening hours, and contact information. A special committee was also established to increase the domestic production of masks – as a result, 60 mask production lines were created which enabled daily domestic mask production to be increased from 1.88 million to 19 million as of the end of April 2020.

What this discussion on face masks shows us is that instead of an either-or choice between lockdown or no lockdown, there is a plethora of policy options that can be implemented. Our survey of the experience of various countries across the world show a general pattern of key practices in successful government responses regardless of whether lockdowns were utilized (e.g. early border closures; promotion of hygienic behavior such as face mask use; disaster relief; and clear, concise, and consistent communications from key leaders). These common measures seem so intuitive and straightforward that we would expect every government in the world to come round to practicing them eventually, like Sweden has. We would hence like to end this article by explaining why American exceptionalism has endured up to now, and to predict why rational policy-making in public health will re-emerge.

President Donald Trump and the conservative governors of several large states are still (at least, up to November 17, 2020) maintaining their refusal to promote mask wearing and social distancing, despite Trump getting infected and having to be hospitalized. Trump devoted his time, instead, to riling up emotions against the “China Virus”, and pulling the United States out of the World Health Organization in the midst of the deadliest global pandemic since 1918. The non-science-based public health position of the Trump team reflects the underlying drivers of Trump’s political movement, which are (a) the tribalist backlash against the strengthening of multiculturalism in US society; and (b) the national security anxieties about the inevitability of a multipolar word order; see Swenson and Woo (2019).

The irony is that the economic effect of the resulting public health policy was a freefall in income and employment in the US economy that was more disastrous than even the 2008 Global Financial Crisis. This very severe economic shock in 2020 brought home forcefully to the US public the extremely high socio-economic costs of policies based on nostalgia for past societal and global norms. This wake-up call caused the political middle ground to shift toward Joseph Biden in the presidential elections held on 3 November 2020. Under President Biden, both US public health policy and US economic policy will once again be guided by scientific knowledge instead of demagoguery, and by enlightened self-interests instead of nostalgia.