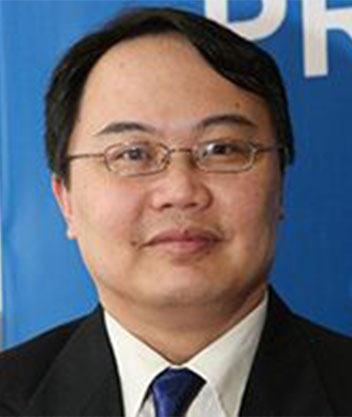 Professor James Chin is a Senior Fellow and the Director of Governance Studies at the Jeffrey Cheah Institute on Southeast Asia at Sunway University. He is also the inaugural Director of the Asia Institute, University of Tasmania. He is a leading commentator on Malaysian politics and has published extensively on Malaysia and the surrounding region. He was previously Senior Visiting Research Fellow, Institute of South East Asian Studies (ISEAS), Singapore; and Professor of Political Science, Monash University, Malaysia campus.  Prior to an academic career, he worked as a journalist in Malaysia and Singapore. His most recent publication are; Malaysia Post Mahathir: A Decade of Change? (2015); 50 Years of Malaysia: Federalism Revisited (2014) and Awakening: The Abdullah Badawi Years in Malaysia (2013).  Prof Chin has published extensively in leading journals such as Asian Survey, Journal of Contemporary Asia, Asian Journal of Political Science, Commonwealth and Comparative Politics, The Round Table, Southeast Asian Affairs, Asian Politics & Policy, Journal of Democracy, Electoral Studies, Democratization and South East Asia Research. He has also written commentaries for leading publications such as The New York Times, The Diplomat, Australian Outlook, The Conversation, The Straits Times, East Asia Forum and New Mandala.

Member of the following professional organization:

It is obvious that social media will be setting the agenda for the next general elections...

The 2018 Malaysian General Election: The Return of Mahathir and the Exit of UMNO 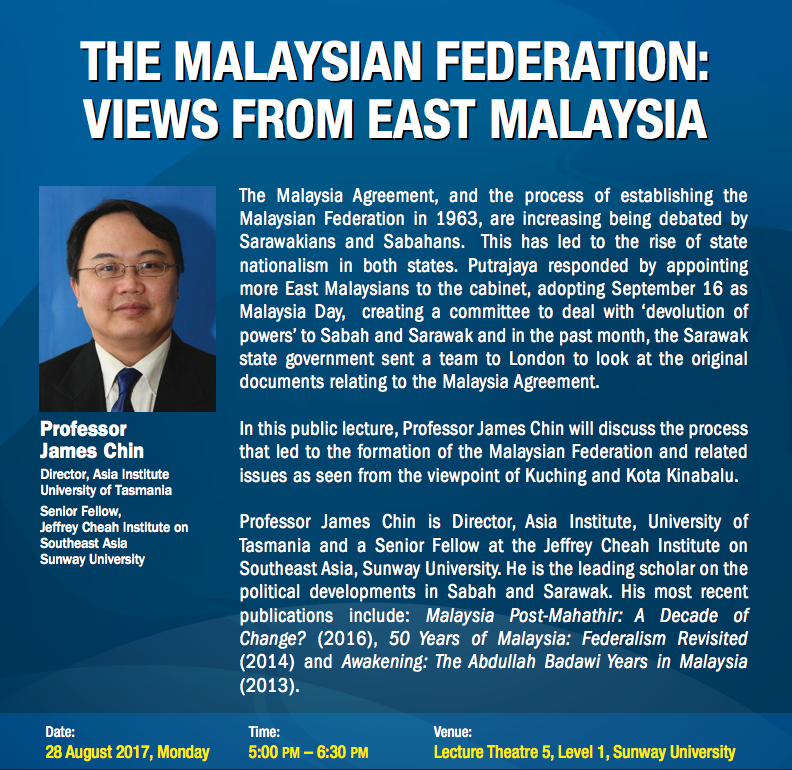 The Malaysia Agreement, and the process of establishing the Malaysian Federation in 1963...

Is Malaysia heading for ‘BorneoExit’? Why some in East Malaysia are advocating for secession

Commentary: Wheels set in motion for another political showdown in Malaysia

Prof James Chin says the motion of no confidence in Prime Minister Muhyiddin Yassin is unlikely to be heard come May 18 when the Malaysian Parliament sits.

Professor James Chin, outlines what to expect as we get closer to 18 May when Parliament meets.

Prof. James Chin was cited expressing surprise over how the budgetary no confidence vote was conducted.

Anwar didn’t have the numbers for bloc vote, says analyst

Prof. James Chin says Anwar Ibrahim may have opted not to call for a bloc vote because he did not have the number of MPs needed.

Prof. James Chin said that the PH proposal to allow withdrawals from their EPF pension fund could be construed as a “populist move”.

Prof. James Chin speaks extensively to MalayMail on the prospects of Pejuang palying the role of kingmaker, depending on the strength of government party Bersatu.

Prof. James Chin asserts that as long as Mahathir is still around, he will do his best to stand in the way of Anwar’s pursuit of helming the top post.

Opposition MPs may abstain from the budget vote, say analysts

Prof. James Chin was cited saying the number of MPs abstaining from the budget vote may be higher this year.

Prof. James Chin commented that the Malaysian 2021 budget is catered towards COVID-19, spending big in order to restart the economy,

Will Budget 2021 be passed?: The Star columnist

Prof. James Chin said that while some MPs dare to not support Budget 2021, it is likely to pass and even if it doesn't, the PM doesn't have to step down.

Prof. James Chin was quoted in his consideration of the best UMNO candidate for Malaysia's deputy prime minister post, if offered by the new PN government.

Divided views on impact of US presidential election

Prof. James Chin believes Malaysians are not so concerned about what happens in the United States, in favour of more immediate local politics.

Malaysian PM hangs on as Anwar’s chance slips away, for now

Prof. James Chin speculates that a month after Anwar launched his attempt to become prime minister, PM Muhyiddin and his 2021 budget will survive.

Prof. James Chin said the outcome of the UMNO council meeting has dimmed the chances of Anwar becoming a prime minister.

Is Malaysia heading for ‘BorneoExit’? Why some in East Malaysia are advocating for secession

Analysts split over call for MPs to contest under parties

Prof James Chin opines with regards to a call for the amendment of laws to allow MPs to contest under political parties instead of individual names in order to put a stop to the practice of party-hopping.

Prof James Chin comments on an announcement that a paper for the implementation of local elections will be ready in 2021 for presentation to parliament.

China accuses US of sowing discord in South China Sea

Polls open in Malaysian state in test for Muhyiddin

Professor James Chin claims that the state election reflects sentiments of the formation of the March 2020 Malaysian "backdoor" government.

East Malaysian public will back Shafie as PM — Political analyst

Academic tells PH to back Anwar and not Dr M

A new coalition to replace PH? Experts at odds

Prof. James Chin weighs in on decision-making factors in multiracial political environments under the pressure to select the eighth Malaysian prime minister.

Prof James Chin argues that Prime Minister Muhyiddin would want to keep his focus on consolidating his position as prime minister.

Malaysia’s Mahathir Kicked out of Party He Founded

Prof James mentions that Muhyiddin Yassin is burning bridges with Mahathir as he is planning to register PN as a formal coalition.

Prof James said PKR seemed to be the weak link in PH right now, adding that there was a possibility of more defections from Anwar’s party to Perikatan Nasional (PN).

Prof. Wong Chin Huat and Prof James Chin comments on Malaysia's efforts to revive an economy battered by the pandemic.

Prof James Chin said that GPS most likely would not join the Perikatan Nasional (PN) coalition formally but prefer to be an ally to it.

Commentary: Wheels set in motion for another political showdown in Malaysia

Prof James Chin says the motion of no confidence in Prime Minister Muhyiddin Yassin is unlikely to be heard come May 18 when the Malaysian Parliament sits.

A PPBM return to PH is unlikely – for now, Muhyiddin will survive

Prof James said the prime minister’s survival was not really at risk while also ruling out the likelihood of Muhyiddin taking PPBM back to PH.

Prof Dr James Chin said the party would likely push for an Islamic state and conservative policies such as those implemented in Kelantan and Terengganu.

In The Spotlight: Malaysia’s new PM who stunned a veteran warhorse

Prof. James Chin states that a leadership shake-up in the GLC's are expected following the revival of economy after Covid-19 subsides.

Dr James Chin said that Malaysia is on the right track in terms of its mitigation plan, although adding that the MCO could have been in place earlier.

Prof Dr James Chin says “If you look at his political history, every time there has been a political crisis he is the last one to show his hand,”

Prof Dr James Chin said he believed many were blaming Anwar for PH’s fall, particularly those in the middle class, a key demographic of support for the coalition.

It’s a wait-and-see game for now

Prof Dr James Chin noted that the last time there was a Sabah and Sarawak Affairs Minister was in the 1960s and 1970s.

Prof Dr James Chin says “This Cabinet follows the Indonesian system of having coordinating ministers. It will please the Malay ground,”

The Big Read: Anwar Ibrahim — what now for the perennial groomsman of Malaysia politics?

Prof Dr James Chin said Mr Anwar would have another shot at the prime ministership in 2023, when he would be 76

Malaysia’s 94-Year-Old Prime Minister Is Out. The New Leader Is Likely to Inflame Racial Tensions

Dr James Chin said “He is likely to steer the country in a more conservative, and a more Malay, Islamic way.”

PH likely to pass a vote of no confidence – Analysts

Prof Dr James Chin said this is because Pakatan Harapan (PH) could still show its dissatisfaction with the new prime minister.

Prof Dr James Chin said the March 2 Parliament session was not confirmed until an outcome of the Conference of Rulers meeting today.

Analyst tells why a PH government, minus PPBM, may not last

Prof Dr James Chin said that if Anwar succeeds in becoming PM, he will bring in more Malays.

Prof James Chin said Abang Johari’s job “is on the line” facing his first electoral test, and all the political noise is something he does not need at this stage.

Prof James Chin said The Mahathir-led government had a steep learning curve, as most of the cabinet ministers were inexperienced.

"This will give [Mahathir] maximum flexibility; he can start everything on a clean new slate," said Prof. James Chin. "He holds all the cards."

Prof. James Chin says “Pakatan Nasional is feasible because of two aims: to get rid of DAP in the government, and to stop Anwar from getting the prime minister’s post”.

Prof. James Chin remarks, “The wonderful thing for Mahathir is that it is impossible for him to lose because heads he wins, tails he wins.”

Prof. James Chin noted that the score reflected public support for crackdowns on cases involving those from the previous political regime.

Anwar in dilemma over calls to sack Zuraida, says analyst

Commentary: Why Mahathir leaving may not solve Malaysia’s problems

Prof. James Chin weighs in on the Muafakat Nasional coalition between UMNO and PAS.

Prof. James Chin states that the incumbent in Balai Ringin has an advantage in the state by-election over the challenger.

Prof. James Chin stated that Anwar Ibrahim's hopes of becoming PM is not dented as he has the majority support from his party, although not from the public.

Prof. James Chin weighs in on the significance of the new UMNO-PAS alliance.

Prof. James Chin states that it is beyond Indonesia's capacity to put a halt to the fires causing the transnational haze.

Dons say why Anwar should take up a Cabinet post

Prof. James Chin expressed that Anwar Ibrahim would remain politically weak if he does not hold a portfolio in the cabinet.

Prof. James Chin weighs in on asylum claims of Malaysians in Australia.

‘New’ Malaysia: Four Key Challenges in the Near Term

James Chin's Column: In May 2018 Malaysia underwent its first regime change in its political history...

The bittersweet return of Anwar Ibrahim to Malaysian politics

Prime Minister-in-waiting Anwar Ibrahim might win the by-election for the Port Dickson seat come Oct 13, but he will have to contest with bigger issues, says one observer...

The euphoria over regime change will last until the end of this year at the very least, says James Chin from the University of Tasmania...

Since gaining independence after World War II, former colonies in the region have...

Why was Najib not charged in the 1MDB probe? The simple answer is that...

Those who came up in the 1980s and 1990s were handpicked by Mahathir and former finance minister and now..

The Big Clean-up in Malaysia

International Analysis: The Molotov Cocktail of Race and Religion in Malaysia

Last week, the highest court in Malaysia ruled that the Catholic Church cannot use the word “Allah” in its publication The Herald. The government argued...

One year later- UMNO holding all the cards

The Rising Dragon: Opportunity or fear?

This month marks the 40th anniversary of diplomatic ties between the People’s Republic of China and the Federation of Malaysia...

Asian may look like a homogeneous body to the outside world...

Obama-mania Coming! The visit could not come at a more symbolic time...