The 2018 Malaysian General Election: The Return of Mahathir and the Exit of UMNO

Click to view highlights on video and photo gallery. 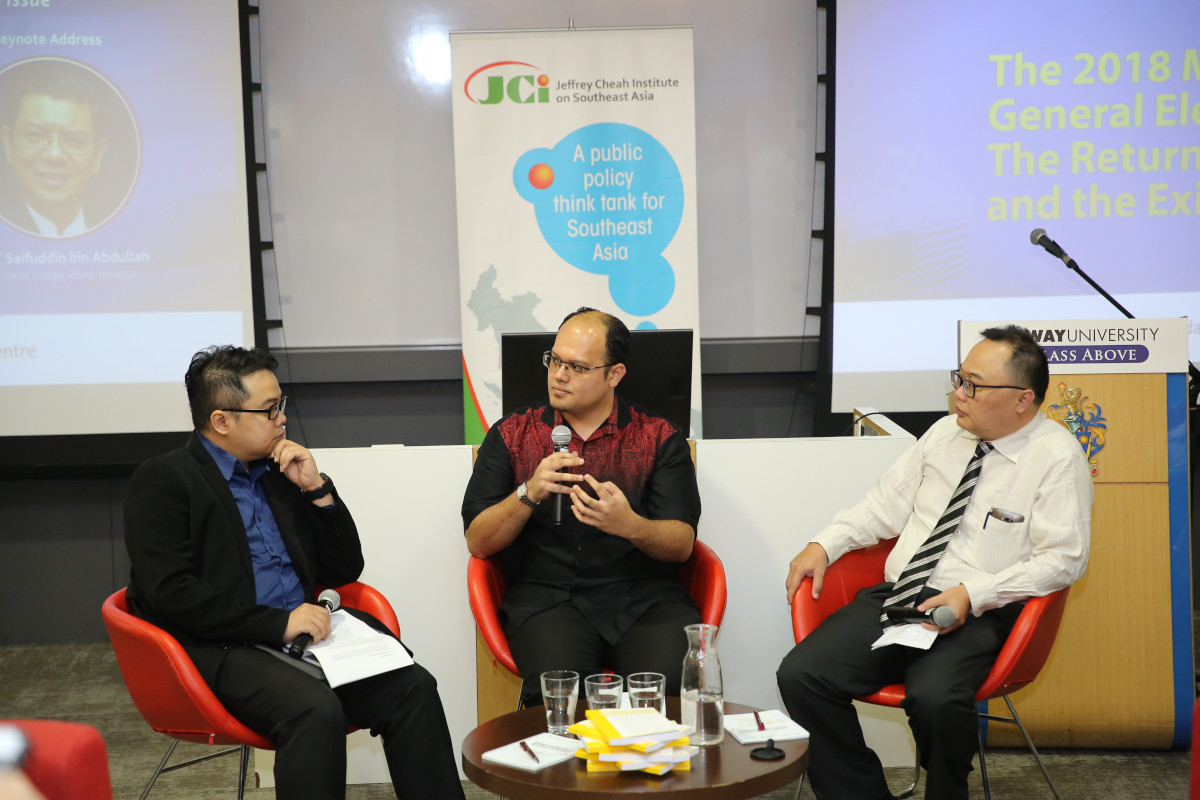 Saifuddin: Malaysia’s firm stand on Israel will not affect diplomatic ties with other countries

Malaysia’s firm stance on matters relating to Israel will not...

Malaysia’s firm stance on matters relating to Israel will not...

On 28 January 2019, Minister of Foreign Affairs Saifuddin Abdullah officiated the launch of the Journal of Current Southeast Asian Affairs Special Issue on the 2018 Malaysian General Election, which was organised by the Jeffrey Cheah Institute on Southeast Asia (JCI). Dr James Chin, Director, Governance Studies Programme of the JCI was present as co-editor of the journal issue. Together with Dr Muhamad Nadzri Mohamed Noor of Universiti Kebangsaan Malaysia, they discussed their contributions to the journal, while Minister Saifuddin added commentary by reflecting on the Pakatan Harapan (PH) campaign for GE14.

“My article’s central argument is that Pakatan Harapan’s breakthrough was made possible when they managed to shape the electoral system from a multiparty system to a 2+1 party system in 2015,” said Dr Muhamad Nadzri.

His article, “the Fall of Barisan Nasional, and Political Development in Malaysia, 1957–2018” posited that Malaysia in the 2008-2015 period had a dual-party system, which briefly become a multi-party system when Pakatan Harapan dissolved. For him, there were four key factors which caused the electoral change in government: Mahathir, and his party, PPBM, joining the opposition was the turning point for the opposition in reorganising themselves; the split in the ruling regime that not only bolstered the opposition but weakened the incumbent; 1MDB and corruption issues were extremely exploitable talking points which were deftly communicated to voters by the opposition; and the role of social media in what is termed as a ‘Whatsapp election’.

James Chin also made novel arguments about Sabah and Sarawak in his piece entitled “Sabah and Sarawak in the 14th General Election 2018: Local Factors and State Nationalism”. He reminded the audience that Peninsular Malaysians underestimate the local factors that drive politics and elections in Borneo. In contrast, 1MDB was only there in the background. Instead, many feel that the old form of federal-state relations has not worked out for Sarawak and Sabah.

“It comes down who can affect change in rural areas. Life can still be quite difficult in Bornean rural areas—roads, water, electricity are often absent,” James argued.

Additionally, interior communities are motivated by fear of being punished for supporting the opposition—but now with different governments in power at both federal and Sarawak level, they are in a dilemma on who to support.

Because of this, Dr Chin forsees that if Pakatan Harapan can carry the momentum from GE14 through, he predicts that Sarawak to fall to PH in the upcoming Sarawak election. While he noted that the upcoming report on the Malaysian Agreement 1963 may propose a new model of federal-state relations, much will also depend on the peninsular states acceptance of the model, especially for those who also have strong regional identities.

Dato’ Saifuddin Abdullah, Foreign Minister of Malaysia launched the journal issue by speaking off-the-cuff on his views of PH’s victory at the election. He noted some “firsts” for winning elections in Malaysia: it was won by an unregistered coalition party; with only one full-time staff; and, without a permanent office. He recounted the difficulties of allocating seats between the coalition parties, nothing that Bersatu, despite being the youngest party, was allocated the most amount of seats for the optics (although many of those seats were impossible to win).

Saifuddin also expressed his commitment towards ‘moderation’ or centrism. The proof was the vast majority of mixed-ethnicity seats was won by PH. However, his calculations shows that Malaysia should have 140 mixed-ethnicity seats instead of the existing 83 seats, which are underrepresented because of malapportionment and gerrymandering. The implication is that extremism and ethnocentric agendas are induced by electoral delineation and the predominance of mono-ethnic seats.

While he was confident electoral delineations could be fixed eventually, his grave worry is the greater shift towards ethnocentric discourse, if UMNO and PAS begin to cooperate. “A fight is a fight, and we need a strong opposition–But my worry is that it is UMNO and PAS, a Malay party and a religious party,” he said.

This was a point both Dr Chin and Dr Mohammad Nadzri also discussed, with the former warning that “If UMNO and PAS get down to a formal coalition or alliance, that will be very bad news for Malaysian politics”. Nadzri predicted that they would cooperate for the Semenyih by-election, paving the way for further cooperation.

Despite the gloomy outlook, Foreign Minister Dato’ Saifuddin concluded the event by reiterating that Malaysia is a multiracial, multireligious society, and he exhorted the audience to work together to put an end to politics of race.

Special Issue Introduction: The 2018 Malaysian General Election: The Return of Mahathir and the Exit of UMNO

In coming years, 9 May will be regarded a watershed moment in Malaysia's political history; on the same level as the 13 May 1969 race riots.