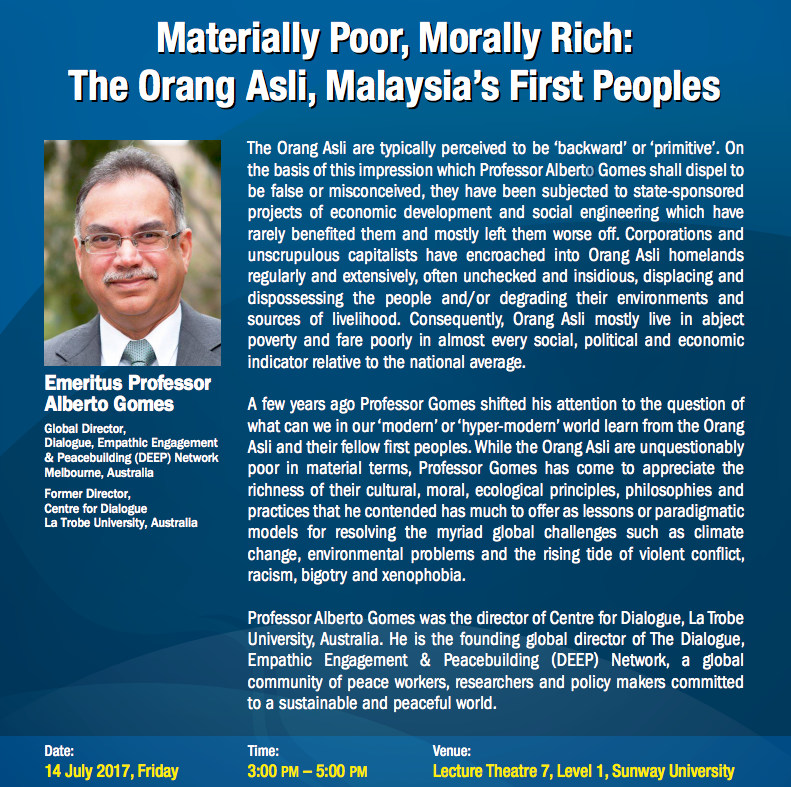 The Orang Asli are typically perceived to be ‘backward’ or ‘primitive’. On the basis of this impression which Professor Alberto Gomes shall dispel to be false or misconceived, they have been subjected to state-sponsored projects of economic development and social engineering which have rarely benefited them and mostly left them worse off. Corporations and unscrupulous capitalists have encroached into Orang Asli homelands regularly and extensively, often unchecked and insidious, displacing and dispossessing the people and/or degrading their environments and sources of livelihood. Consequently, Orang Asli mostly live in abject poverty and fare poorly in almost every social, political and economic indicator relative to the national average.

A few years ago Professor Gomes shifted his attention to the question of what can we in our ‘modern’ or ‘hyper-modern’ world learn from the Orang Asli and their fellow first peoples. While the Orang Asli are unquestionably poor in material terms, Professor Gomes has come to appreciate the richness of their cultural, moral, ecological principles, philosophies and practices that he contended has much to offer as lessons or paradigmatic models for resolving the myriad global challenges such as climate change, environmental problems and the rising tide of violent conflict, racism, bigotry and xenophobia.

Professor Alberto Gomes was the director of Centre for Dialogue, La Trobe University, Australia. He is the founding global director of The Dialogue, Empathic Engagement & Peacebuilding (DEEP) Network, a global community of peace workers, researchers and policy makers committed to a sustainable and peaceful world.