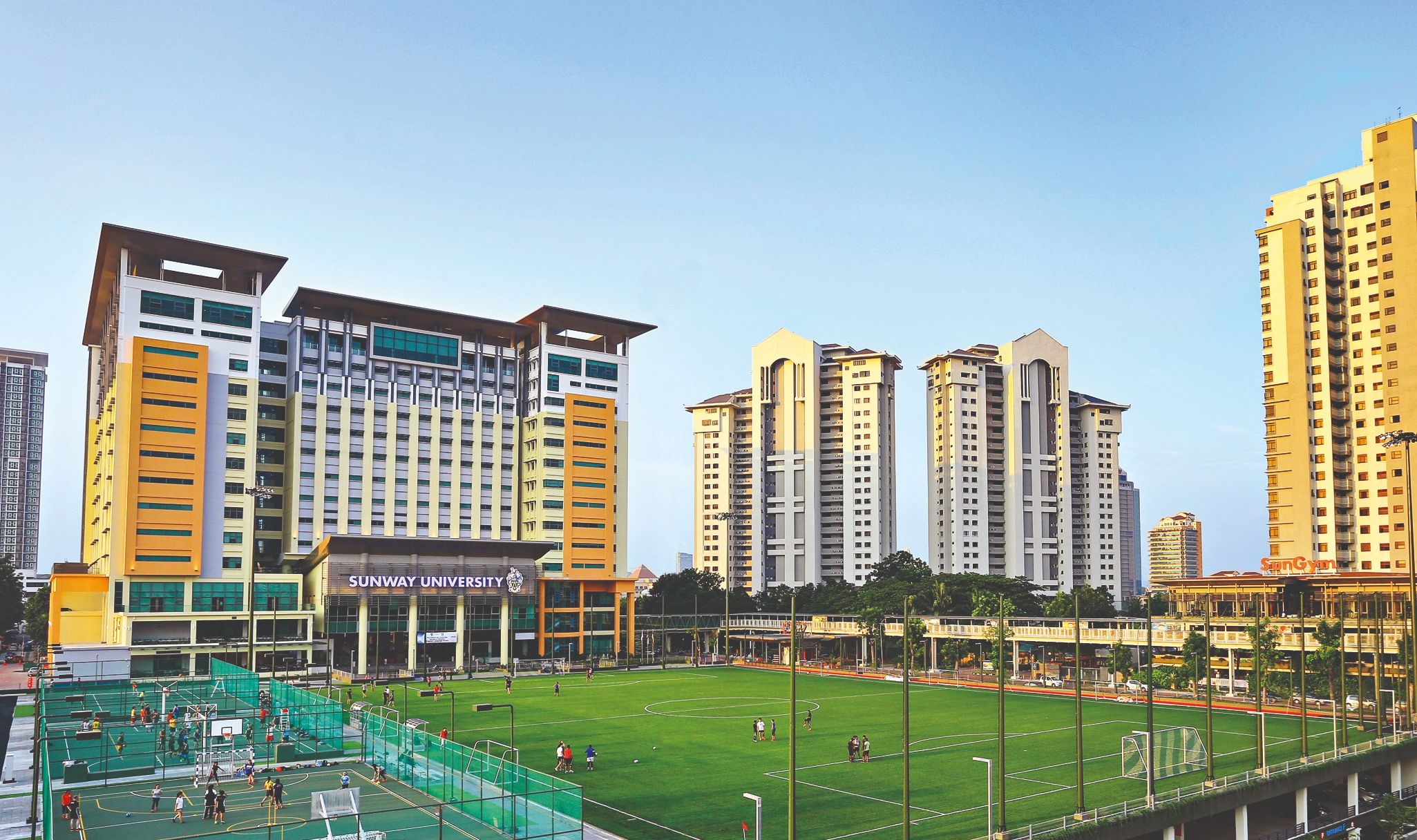 Sunway University is a leading not-for-profit private university committed to the pursuit of education through scholarship, research and enterprise. It is ranked among the top 2% of universities in Asia and rated as a 5-star institution by Quacquarelli Symonds (QS). For the 2020 rankings, the University was ranked within the 751–800 range, out of 1002 universities ranked in the QS World University Rankings. The University was also ranked among the top 150 young universities worldwide in the QS Top 50 Under 50. The University has also been awarded a 5-Star rating in the SETARA 2017 assessment of Malaysian Higher Education Institutions, and is one of only eleven universities in Malaysia to be awarded the Premier Digital Technology University status by the Malaysian Digital Economy Corporation.

The University is committed to multi-disciplinary research in sustainable development within an urban environment, and promoting health, well-being, and the development of new technologies in addressing some of the world’s most pressing problems. We are establishing ourselves on the global stage with some of our researchers being among the most highly cited globally and actively engaged in cross-border collaborations. The University is committed to investing in the next generation through research-led teaching and to this end, continues to equip our campus with state-of-the-art teaching and research facilities.

To date, the University has drawn more than 26,000 students from over 90 countries to its vibrant, 880,000-square-feet campus. Supported by the Jeffrey Cheah Foundation, the University has invested in excess of RM400 million in its infrastructure and continues to expand its teaching and learning, and research spaces. Here at Sunway, students and academics thrive in the discovery of ideas and opportunities in the heart of Sunway City, adjacent to some of the best public, medical and social amenities in Malaysia.

University location:
The University is in Bandar Sunway, Selangor which is now effectively a suburb of Kuala Lumpur. Bandar Sunway is an almost completely self-sufficient community with homes, businesses, schools, healthcare, shops and leisure facilities. It is located within the vicinity of Sunway hotels and the Sunway Pyramid Shopping Centre. There is a covered walkway from the Pyramid Shopping centre to the Sunway University building.

About the Host Partner

The Jeffrey Cheah Institute on Southeast Asia is an independent public policy think-tank, based at Sunway University on the outskirts of the Malaysian capital, Kuala Lumpur. For more about us, visit our introduction page.

Kuala Lumpur is the capital of Malaysia. Greater Kuala Lumpur, also known as the Klang Valley is dominated by the 451m-tall Petronas Twin Towers, a pair of glass-and-steel-clad skyscrapers with Islamic motifs. The towers also offer a public skybridge and observation deck. The city is also home to British colonial-era landmarks such as the Kuala Lumpur Railway Station and the Sultan Abdul Samad Building. Area: 243 km², estimated population: 1.80 million as of 2017.

The Malaysian Ringgit is the currency of Malaysia. Our currency rankings show that the most popular Malaysia Ringgit exchange rate is the USD to MYR rate. The currency code for Ringgits is MYR, and the currency symbol is RM. Major currencies can be exchanged at most hotels, banks and licensed money changers.

Please note this information is intended to give a general understanding and may be subject to change:

A valid passport with more than 6 months validity beyond the date of entry is needed for all countries’ citizens to enter Malaysia. Please visit the website of the Immigration Department of Malaysia to check if you need a visa.

If your country is not listed, you are allowed to enter without a visa for an ordinary visit of less than one month. Delegates and guests who require visa can request an invitation letter from the organizer once registered.

Airport Limousine: This service is operated on a pre-paid coupon basis and is available 24 hours a day. Please purchase the coupons at the Limousine Counter in the International Arrival Hall. The journey from KLIA to Sunway University is around 60 minutes. Budget taxis are also available. Please purchase coupon at the designated counters.

KLIA Express: The Express Rail Link (ERL) links KLIA and Kuala Lumpur Sentral Station. The journey from KLIA to KL Sentral is approximately 28 minutes. Currently, trains are available every 30 minutes from KLIA to KL Sentral. From the Sentral Station, passengers may purchase coupons at the taxi counter for the journey to their respective hotels. Note that KL Sentral is still about 16km away from Sunway University.

Commuter cards: West Malaysia uses the Touch N’ Go card, a contactless card for electronic payments for highway tolls, public bus fares, and public train fares with stored pre-paid value. They are available at most convenience stores and at most train stations.

LRT: The Light Rail Transit (LRT) is the first public rail line in the Klang Valley and covers a distance of 91.5KM and consists of 74 stations. There are three interconnected lines (The Kelana Jaya line, the Ampang line and the Sri Petaling line). Daily operating hours are between 0600 – 2400. Season tickets can be purchased at any LRT station. The closest LRT train station to Sunway University is USJ7 station on the Kelana Jaya line (approximately 40mins from KL Sentral).

MRT: The MRT is a higher capacity public rail line in the Klang Valley which first line opened in 2017 and a second line will be opening in 2021-2022. Unfortunately, the MRT does not serve the Sunway University vicinity.

Monorail: The Kuala Lumpur Monorail system in Malaysia serves 11 stations running 8.6 km and its route starts from Titiwangsa Station to the KL Sentral Station. Daily operation hours are 0600 to 2400 and it is operating at 3-minute intervals. The monorail does not serve the Sunway University vicinity.

Taxis: All taxis in KL are fitted with meters and can be hailed at designated taxi stands or booked through phone.

Car Rental: Cars can be hired from car rental agencies. Drivers must be in possession of a valid international driving license. Drivers must always drive on the left side of the road.

GrabCar: Use Grab to get to wherever you want with safer and stress-free rides. Please refer to https://www.grab.com/my/car/

Business attire is most appropriate for attending conference and business functions. For sightseeing or shopping, light cotton clothing is advised. Most malls and restaurants are air-conditioned.

As a modern Islamic, multi-religious and multi-cultural country, we offer a wide range of dishes from indigenous food to Chinese, Malay, Indian, Halal, non-Halal, vegan, vegetarian and much more. This will no doubt appeal to your Muslim, Hindu or Buddhist delegates.

Corporate Rate bookings for EAEA-17 delegates will be made available for the following hotels for the convention dates of 27-28 August 2022:

We suggest visiting www.agoda.com or www.booking.com for other hotels in the Sunway City area.

Disclaimer: Please note that these links are intended solely for information purposes and is not to be construed, under any circumstances, by implication or otherwise, as a recommendation or endorsement. We strongly advise all participants to do their own research on the hotels.

The organising committee is fully aware of the threat posed by COVID-19 to conference delegates and the people around them. We are monitoring university, government, and international guidelines on risk-mitigation practices in the conduct of our events and meetings.

As of 1 July 2022, Malaysia is open to travel for visitors who are fully vaccinated (2 doses of a recognised vaccine) and no further testing is necessary. Visitors will need to (1) download the Malaysian contact tracing mobile app, (2) fill in the digital pre-departure form on the app, and (3) verify their digital COVID-19 vaccine certificate. Otherwise, partially vaccinated and unvaccinated travellers are required to take pre-departure and on-arrival tests. They must also quarantine for 5 days upon arrival.

The procedures to return to your home country or enter another country will differ based on your destination.

Following the Malaysian government guidelines, indoor events still require the wearing of face masks. They are not mandatory outdoors or for outdoor events, although encouraged especially in situations bearing higher risk of transmission.

The organising committee is monitoring developments in local health guidelines and will continue to inform delegates of meeting practices in light of the ongoing COVID-19 pandemic.

Present a paper at the Convention by submitting an abstract of your paper not exceeding 200 words by 6 June 2022.

To secure your spot for the conference, find out the registration steps and payment methods.

Sunway University is a leading non-profit private university situated in the outskirts of Kuala Lumpur, Malaysia.

Find out more about The East Asian Economic Association (est. 1987), the first international academic organization to focus on the economics of East Asia.

Get in touch with Jeffrey Cheah Institute on Southeast Asia (JCI) as the proud organiser of the 17th EAEA International Convention.