Skip to content
Does Muhyiddin have a parliamentary majority?

Does Muhyiddin have a parliamentary majority?

IN theory, Prime Minister Muhyiddin Yassin commands a parliamentary majority, but he is acting as if he does not.

His behaviour is like a delinquent student who fears the discipline master and wants the morning assembly to be over in five minutes.

That is why our parliament will be convened for only one day on May 18.

A 10-week pushback from the original date (March 9), the May 18 seating has to happen for one reason. If not reconvened, the Parliament will stand dissolved by June 5, six months from Dec 5, 2019 when it was last in session.

That’s the constitutional mechanism in Article 55 (1) – to make sure the government cannot be unaccountable to parliament for more than six months.

On May 18, only government bills and motions are scheduled, with no further details on parliament’s official website till now.

Neither questions nor motions are allowed. Of course, no debate and voting on Muhyiddin’s Covid-19 stimulus package – announced in three stages on March 16, March 27 and April 6 and totalling RM261 billion, which is what any honourable government would proudly do.

To prevent any motion of no-confidence to be mooted, parliamentarians are deprived of their right to question ministers.

Since a budget rejected is equivalent to a motion of no-confidence passed, parliamentarians are further deprived of their right to “be prihatin” (care) and vote on Muhyiddin’s Prihatin budget.

In short, Muhyiddin disables two functions – scrutinising government and approving budget – of parliament to prevent its most important one – retaining or firing the prime minister.

Muhyiddin should have confidence in his survival because, in theory, he should have 113 out of 222 votes, based on his administrative lineup.

It is important to note that parliamentary democracy does not necessitate a majority government. A minority government can survive as long as it can get the support of enough opposition members on a “confidence and supply” basis, namely to defeat a vote of no-confidence, to carry a vote of confidence or to pass a budget (supply bill).

A government’s members cover both frontbenchers (ministers and deputy ministers) and backbenchers. In the UK, government backbenchers can and often vote against their own government, without switching sides.

With majority governments, backbench revolt becomes a key device of check and balance.

In contrast, ministers and deputy ministers must always vote with the government, because of collective responsibility. Because they are on the government’s payroll, they are also called payroll votes.

Ministers and deputy ministers normally join the government as party representatives. However, occasionally, some frontbenchers may be independents without party or act without party affiliation.

Adding up these numbers, Muhyiddin would have secured a 112-vote majority in the 222-member House. Two more, Bukit Gantang MP (ex-Umno independent) and Sri Aman MP (PSB) voiced their support for Muhyiddin on March 1 but the latter’s party soon announced a U-turn.

Adding Bukit Gantang MP on a “confidence and supply” basis, Muhyiddin has a 113 majority in Dewan Rakyat.

On March 12, Umno-vice president Mohamed Khaled Nordin declared on Facebook the position of Umno’s Supreme Council: Perikatan Nasional (PN) is a coalition of parliamentarians, not of parties. In other words, Umno is not part of PN, only 16 ministers and deputy ministers from Umno are.

This reduces Muhyiddin’s government members to 89, namely 73 from the parties and 16 independent frontbenchers from Umno.

If Umno’s remaining 23 parliamentarians will support Muhyiddin on a confidence and supply basis alongside Bukit Gantang MP, then Muhyiddin still commands a 113 majority to survive any ouster attempt. But Umno does not even promise that.

Now everyone is a payroll vote?

Why does Umno pull Muhyiddin’s leg? As in the ousted Pakatan Harapan government, Bersatu grabs a chunk of payroll votes much larger than its seat share warrant. Only five of 31 Bersatu MPs are backbenchers (including Ahmad Faizal Azumul who is already Perak menteri besar), as compared to 23 out of 39 from Umno.

But Umno was not the only party eyeing for ministerial posts. Tiong King Sing, president of PDP believed he was too senior to be the deputy minister for national unity.

On April 20, his self-appreciation was rewarded with a ministerial job – as Muhyiddin’s special envoy to China.

Earlier on April 2, PAS president Abdul Hadi Awang was made the first minister-rank special envoy to the Middle East.

Hence, Muhyiddin’s administration is expanded to 71, with one less deputy minister, but two more ministers who are paid RM39,900 in salary and allowance monthly. 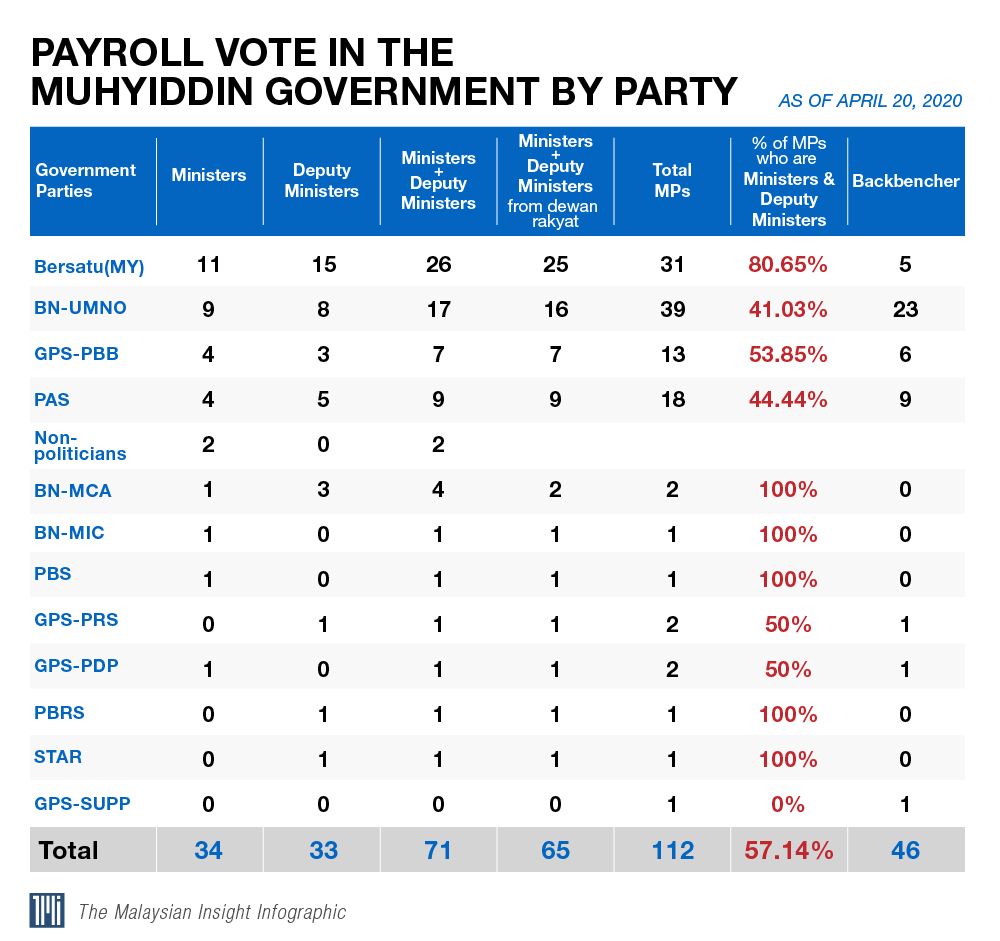 In a country with no convention of backbench revolts but only a tradition of party-hopping, the meaning of payroll vote naturally has to be stretched.

If only there were indeed 500 countries in the world, perhaps Muhyiddin can easily appoint 45 more special envoys.

Unfortunately, since Malaysia has only 108 foreign missions, the “payrolls” have to come from some government agencies and government-linked companies (GLCs).

To be fair, Harapan too appointed politicians to head government agencies and GLCs. However, many appointments – especially by Bersatu and Amanah – are for non-MPs including lost candidates like Husam Musa (Kada), Wan Saiful Wan Jan (PTPTN) and Nik Omar Nik Abdul Aziz (Yadim).

From my Google search, only 12 PH backbenchers were ever appointed to lead a government agency or GLC, or 15% out of 82 PH parliamentarians who were neither a federal/state frontbencher nor a deputy speaker.

Announced on April 12 by – aptly – the minister in charge of parliamentary affairs, Takiyuddin Hassan, the PN government would take the expansion of payroll votes to unrivalled height: every government backbencher would be on some GLC’s or government agency’s payroll.

Since PN has only 45 backbenchers who have yet to get their second salary or allowance, the 100% payroll KPI is certainly achievable.

So far, three MPs have got their second job – two from PAS and one from Umno.

As reported by Harian Metro on April 12, nine more appointments are speculated for government backbenchers – six for Umno and one each for Bersatu, PAS and GPS-PBB.

If the speculation comes true, the remaining 33 PN backbenchers – 16 from Umno, eight from GPS, six from PAS and three from Bersatu – would really look like the losers.

However, since Muhyiddin fears any one of them voting against him, he will not leave any PN backbencher behind. Sooner or later, everyone will get a second salary.

Since the money comes from you as a taxpayer, perhaps you might want to keep a record of who you hire or will employ.

By the way, are you thinking what I am thinking? Which GLC will Muhyiddin let P085 Pekan and P075 Bagan Datoh manage now that the US has returned RM1.3 billion of 1MDB money to Malaysia?

This article first appeared in The Malaysian Insight on 26 April 2020.

DO REGISTER TO VOTE!