ABSTRACT: Cambodia has been exploring a free trade agreement (FTA) with the EAEU to expand market access to Eastern Europe. The EAEU is a common market comprised of five nations (Armenia, Belarus, Kazakhstan, Kyrgyzstan, and Russia), 176 million people, and a gross domestic product of US$2.5 trillion.

The study examines the key impacts of a Cambodia– EAEU FTA on the Cambodian economy and the ASEAN region in terms of trade, investment, welfare, and the growth impact on the domestic and regional economy, providing a quantitative and qualitative assessment of the impacts of the proposed FTA between Cambodia and the EAEU on Cambodia.

END_OF_DOCUMENT_TOKEN_TO_BE_REPLACED 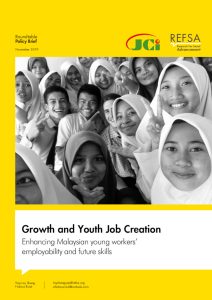 Research for Social Advancement (REFSA) and Jeffrey Cheah Institute on Southeast Asia (JCI) on 6 November 2019, conducted the first in a series of roundtables aimed at examining Malaysia’s most pertinent economic issues. Participants deliberated on a number of key approaches to tackling persistently high youth unemployment, outcomes which are outlined in this joint Policy Brief.

END_OF_DOCUMENT_TOKEN_TO_BE_REPLACED

The 2030 Agenda, as adopted by the United Nations General Assembly, paves the way forward for planet, people and prosperity—an Agenda that replaced the Millennium Development Goals with the Sustainable Development Goals (SDGs). The SDGs consist of 17 goals, 169 targets and 232 indicators. Essentially the goals exist to address sustainability holistically, covering all dimensions including economic, social, cultural and ecological aspects. The United Nations has identified Goal 4: Quality Education as one of the main drivers in achieving the Agenda. This paper focuses specifically on Target 4.7: Education for sustainable development and global citizenship. Universities play a vital role in engaging youth and generating knowledge and expertise in understanding and implementing the SDGs. This paper explores the role of universities in ensuring the SDGs are met, as a mobilising catalyst for accelerated implementation, as well as case studies of sustainable campuses in Malaysia that showcase the community and student outreach projects, in line with the SDGs, such as the Bicycle Project at the University of Nottingham, Malaysia Campus, Kompos to Kelulut (K2K) at the Universiti Sains Malaysia and Sunway Youth for Sustainable Development at Sunway University. The case studies show that education goes beyond the formal curricula, emphasising on soft skills and critical thinking – a major component of and contributor towards proenvironmental behaviour. A set of recommendations are included to address limitations in the study.

In this paper, we examine the impact of ASEAN-Australia-New Zealand Free Trade Agreement (AANZFTA) on Australian trade and in particular on imports from ASEAN member countries to Australia. This paper explicitly examines the FTA utilisation (AANZFTA) by ASEAN countries (10 ASEAN countries) at 6 digit-trade classification from 2012-2016 using Australian customs data. We implement the Hayakawa and Shiino (2018) model of FTA utilisation based on preferential tariff margin. The study accounts for both multilateral and bilateral FTAs across the countries in study. The result indicate that the preferential margin is positive indicating positive impact on FTA utilisation. However, the results also indicate that the utilisation rates of AANZFTA are low across the ASEAN countries as compared to bilateral FTAs in Malaysia, Thailand and Singapore. We also found exporting effects in Indonesia, Malaysia, Philippines and Vietnam. The learning-effects of using FTAs are also strong in our study. We also found evidence of co-sharing rule in the FTA tends to increase the utilisation of FTAs.

Childhood stunting has recently garnered public attention in Malaysia, but there remains a general lack of understanding surrounding the issue.

Policymakers and the general public have mostly focused on the immediate causes of stunting, particularly on inadequate dietary intake, but have not paid as much attention to the underlying determinants of stunting.

This paper seeks to contribute to the knowledge gap by: (i) highlighting the causes and effects of stunting; (ii) identifying statistical and historical trends on stunting in Malaysia; (iii) assessing Malaysia’s performance in the underlying determinants of stunting; and (iv) providing policy recommendations on addressing stunting among Malaysian children.

Despite large differences on almost every dimension, ASEAN can claim to be one of the most successful regional groupings in the world. ASEAN has largely achieved regional peace and security, despite being caught in the US-China power rivalry in recent years. The ASEAN region has also become one of the largest economies in the world, with a combined GDP that ranks behind only the EU, US, China, Japan, India and South Korea and growth rates well above the world average. ASEAN economic integration has proceeded simultaneously via market-driven regional production networks and global value chains as well as via government-driven trade and investment agreements. The objective of creating an ASEAN Economic Community (AEC) was adopted in 2015; and the next phase of integration, AEC 2025, is under implementation. ASEAN has also entered into regional integration agreements (known as ASEAN+1) with China, Japan, India, South Korea, Australia, and New Zealand, and is in the process of negotiating a mega Regional Comprehensive Economic Partnership (RCEP) agreement with these six partners.

One often-mentioned vision about the future of the financial architecture of ASEAN –that was popular in the period after the Asian Financial Crisis — was an Asian Economic Union (AEU), where there was comprehensive, deep regional economic integration. The basic question is whether the final realized form of the Asian Economic Union (AEU) would be closer to the European Union (EU) or to the North America Free Trade Area (NAFTA). The return of China as a major global economic power also means that the Renminbi (RMB) could, in the future, attain an international status that is parallel to the USD. The emergence of the RMB as a key international currency, however, does not in any way imply that it would also emerge to be the common currency for East Asia. China in the future would most probably have the same individualistic attitude on China’s monetary policy as the United States has at the present toward other countries that have dollarised their economies, which is that the primary concern of US monetary policy is US welfare. Given (1) the NAFTA-like disparity in economic power in AEU in the future, and (2) the absence of policy-induced integration of national labor markets mean that the only stable configuration is the survival of individual East Asian currencies with limited coordination among them in normal times. It therefore appears to us that the many present efforts to promote closer exchange rate cooperation will not succeed in the long-run.

Malaysia has witnessed growth even before independence in 1957 but per capita income has risen much faster since independence. In 2014, per capita GDP was 7.5 times what it was immediately after independence. But why didn’t Malaysia grow as rapidly as its Northeast Asian neighbors? Had Malaysia been held back by specific government policies? And if government policies inhibited growth, how was it that Malaysia’s economy still performed far better than the economies of most of Latin America and Sub-Saharan Africa?

The aim of this paper is to decipher the reasons behind these variations in Malaysia’s comparative economic growth with other countries. This essay then seeks to attempt to answer the question of whether Malaysia will eventually catch up with the high income countries of the world or whether it will be caught in the ‘middle-income trap’.

Malaysia has enjoyed considerable success in expanding access to education. Less than 10 percent of Malaysian adults now have no schooling, compared to more than half the population at the time of independence in 1957. But, despite spending heavily on education (roughly between 5 and 6% of GDP), Malaysian pupils perform poorly in international tests. In the Asian region, Malaysia is ahead only of Indonesia.

The government has embarked on what it promises will be the deep-seated reform of the national education system. The National Education Blueprint, released in 2013, acknowledged the decline in the performance of government schools and laid out an 11-point agenda for change, promising to lift Malaysia into the top third of international testing benchmarks in 15 years. The blueprint includes a variety of reform initiatives, from improvements to English language teaching, to the teaching of “thinking skills.” It also includes the development of what it calls, Trust Schools, one of a series of public-private partnerships about which there has been relatively little public discussion. This paper will seek to narrow that information gap, assess the programme’s strengths and weaknesses and suggest ways in which it can be developed further.

Devised by state investment fund Khazanah Nasional and inspired by US Charter Schools and similar endeavours in Britain and Sweden, the programme allows schools greater autonomy, and has been most effective in raising standards with its more progressive approach to learning and classroom practice. Weaker schools have shown the most immediate improvement. The government has signalled it plans to expand the programme further, with a target of 500 Trust Schools by 2025. It further underlined its commitment in the 2015 Budget, allocating 20 million ringgit to support 20 Trust Schools.

This paper will not aim to address the issue of the Trust School programme’s strength as a Public-Private Partnership. While the business structure may have some bearing on a school’s performance, the teachers, and what goes on in the classroom, have been shown consistently to be the most crucial factor in a child’s success at school.

This paper will, therefore, focus on the approach to learning and training that Trust Schools have adopted; methodologies that enable teachers to rediscover their love of teaching through school-based training and effective mentoring. Better teaching, combined with an expansion on extra-curricula activities such as art, the environment and sport have also had an effect on the children, who are also expected to take more responsibility for their learning and participate actively in class. Schools that have adopted the programme say their students are more excited about coming to school than they were before.