Malaysia’s power concentration at two levels – between central and sub-national players and amongst central players – has facilitated elite consensus and quickened the ECRL’s rollout. Contrarily, Indonesia’s decentralization exercise since the late 1990s, both at the spatial level and within the executive arm of the central government, has encouraged plurality of opinion and prevented power consolidation. Despite President Joko Widodo’s clear intentions to expedite the Jakarta-Bandung HSR, he has been checked by multiple influential stakeholders, resulting in delays and worries that the project might be suspended.  The findings suggest that where Chinese railway projects are concerned, a wide range of interest groups in the BRI recipient states can make outcomes less open to generalization. 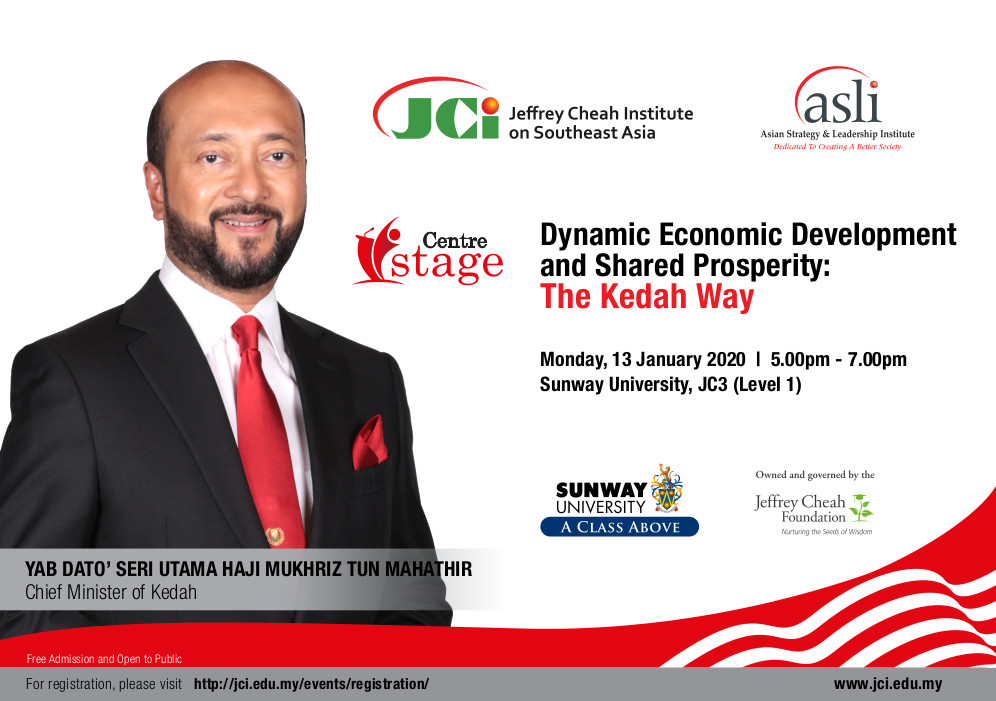 It is our pleasure to invite you to CENTER STAGE WITH YAB DATO’ SERI UTAMA HAJI MUKHRIZ TUN MAHATHIR, Chief Minister of Kedah.

This exclusive conversation is jointly organised by the Jeffrey Cheah Institute on Southeast Asia (JCI) and the Asian Strategy and Leadership Institute (ASLI). The conversation will be moderated by Professor Dato’ Dr Woo Wing Thye, President of JCI.

In the Malaysian context, social media platforms, particularly Facebook and Twitter (and increasingly, YouTube), were weaponized to further the cause of the former Malaysia’s Barisan Nasional-constituted government. The previous government accessed state’s resources to hire big data consultants (i.e. Cambridge Analytica/SCL) and marshal paid trolls (cybertroopers) to disrupt their opponents campaigns, and enacted Malaysia’s Anti-Fake News Bill prior to GE14 as a pre-emptive strike against their political opponents. Manipulation of newsfeeds on social media would not have taken place without these enterprises taking advantage of new technical affordances which were adapted from targeted advertising and ‘disruption’. This JCI Forum will address different forms of internet political trolling triggered by pre and post GE14 events.

As we edge towards Web 3.0, what goes on ‘under the hood’ of a digital platform is inseparable from the social hacks and exploits performed by the users of the platforms (regardless of the latter’s technical sophistication), this JCI Forum will consider the different kinds of political trolling that had taken place in Malaysia’s cyberspace during the period before and after GE14.

Register for the JCI Forum here.

As a consequence of 30 years of peace since the end of the Communist Insurgency, the Malaysian public at large has developed a serious disconnect with the Malaysian Armed Forces. This, in turn, has created a considerable barrier to having effective and meaningful public discourse regarding national defense policy and military reforms.

In order to restart this conversation, this conference aims to achieve the following:

This conference is organized by #Undi18 and supported by the office of the Deputy Defence Minister, YB Liew Chin Tong and the Jeffrey Cheah Institute on Southeast Asia

It is obvious that social media will be setting the agenda for the next general elections. In fact, there is little doubt that social media will decide whether Pakatan Harapan will last its full term in power. What does it mean for Malaysia now that the political class in Malaysia is held hostage by social media? Does the Malaysian social media landscape reflect the ‘will’ of the people or organised groups with the resources to manipulate social media? Given the omnipresence of religious and ethnic tensions, will social media be the space for hate speech and right-wing groups? What role will online news play in this space?

This event is held in conjunction with the launch of the book Malaysian Politics in the New Media Age: Implications on the Political Communication Process, by Dr Pauline Leong. This book provides a comprehensive overview of the impact of the Internet on Malaysian politics and how it has played a pivotal role in influencing the country’s political climate. It investigates the interplay between traditional and new media on politics in Malaysia.

Register for the panel and book launch here.

The Master in Public Policy at the Jeffrey Cheah Institute on Southeast Asia prepares students to develop practical solutions to real-world policy problems in the region through a multi-disciplinary focus in economics, quantitative analysis and public policy management. Applications for our inaugural March 2020 intake are now open.

Want to find out more?

Come for the course preview this Saturday:

In 1991, the then Prime Minister Dr Mahathir Mohamad proposed ‘Vision 2020’, where he espoused his aim of Malaysia becoming a fully developed nation by 2020. As we inch closer to the year 2020, where does Malaysia stand today? Dr Mahathir is once again at the helm of the country, but does his ‘shared prosperity’ agenda for 2030 offer us a new vision for the future, or do we need different perspectives altogether to chart the nation’s direction? Join us as we discuss these pressing questions and more.